After being asked for some advice by a new alpaca breeder I decided to put together a few of my thoughts on feeding alpacas, space and grazing.

From a feeding perspective this is a general guide and different animals may have different nutritional requirements. Please check with the person you are buying your alpacas from.

So you’ve decided you want to keep alpacas, whether it’s for breeding, fibres or pets, you now want to take the next steps and alpaca care is something you’ll need to pay particular attention to. 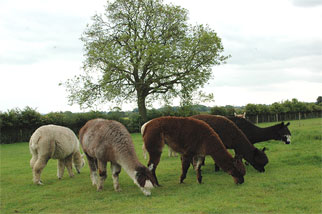 Having enough space for alpacas to graze is important. Even if you’re only going to have a few Alpacas to begin with, that number will soon increase if you have pregnant females. Ideally, you can have 5-6 alpacas per acre, assuming you have additional space to operate a grazing rotation. In basic terms, a grazing rotation involves moving your alpacas from field to field, or area to area (which is separated by fencing). This allows the grass to re-grow, but more importantly, it will reduce problems in the fields such as worms. If you do have a worm problem you’ll need to leave the area empty and seek professional advice for treatment for both the area and animals.

Alpacas will generally use the same areas for dunging, making it easier to remove. This has to be done on a regular basis to reduce the chance of worms and disease.

Alpacas don’t mind getting wet, however they don’t like to stand in wet ground. Health problems can develop if they have to stay in standing water, so you’ll need to make sure there’s some firm and higher ground available. If possible, it’s also worth having an open front shelter to provide protection in extreme weather. Maybe an obvious point, but one worth mentioning, is that adult females and males should be kept separated. An ‘alpaca care’ guide will be added at a later date to cover points such as this, as well as other general information. 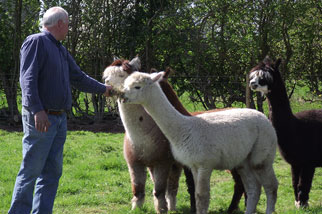 You may be thinking at this point that as long as they have enough grass to eat while grazing, this is enough. However grass can be too rich and sometimes lead to health problems including diarrhoea. Generally, I would suggest limiting the area they can graze in late spring/early summer to minimise this problem. Grass also has a relatively high sugar content, but low mineral content so without proper care and supplementation, mineral deficiency problems can develop.

So in addition to grass, you’ll need to feed your alpacas hay or haylage which will supplement their fibre intake. I generally do this all year round, but you will need more in the winter months due to the lack of quality grass. Don’t use haynets because animals can get their heads caught.

In order to get a good mineral balance in their diets I would recommend a good feed such as ‘Camelibra’ (produced by GWF Nutrition), as well as ‘Fibregest for Cemlids’ in winter months. I also feed Fibregest to pregnant females or lactating females.

Alpacas don’t eat thistles or nettles so if these start overgrowing and taking up valuable grazing space, they’ll need to be removed. Also you should be checking for plants which are toxic to Alpacas such as ragwort, foxgloves and bracken. Laurus nobilis, yew and laburnum should also be removed or quarantined.

There must be a constant supply of fresh, clean drinking water. As general rule, alpacas will need to drink between 5-10% of their body weight in water each day. The water source also has to be placed well above the ground to avoid the spread of BTB from badgers.